My Fixie by Paul Cassidy

Albert Einstein once wrote, "Life is like riding a bicycle. To keep your balance you must keep moving." Of course, this is most true when riding a fixed gear bike. A fixed-gear bike, or fixie, is a bike that does not have the ability to coast. Whenever the back wheel is turning, the pedals are moving in the same direction. Thus, you always have to keep pedaling. Almost everyone has ridden a fixie as a child; you probably remember it as a tricycle.

I converted an old Raleigh Supercourse into my very own fixie. The Raleigh was my first road bike, and after upgrading to an Independent Fabrication Crown Jewel two years ago, the Supercourse sat, forlorn and neglected, in the garage. An article in Bicycling Magazine gave me the idea to give my old road bike new life.

I worked with Roy at the shop to convert the bike. We installed a track crank and bottom bracket and took off the front and rear derailleurs. In order to save some money, I opted to continue using my existing STI shifters for brake levers. For a rear wheel, I opted to use a Surly Flip Flop hub. This hub allowed me to use the bike either as a fixie or as a single-speed (which allows me to coast), giving me flexibility in my bike setup. True fixies have horizontal rear dropouts which allow one to slide the rear wheel forward or backward to achieve proper chain tension. Like most modern multi-speed road bikes, my Raleigh has vertical dropouts, which did not give me any rear wheel adjustability. In order to ensure proper chain tension, we used a chain tensioner. 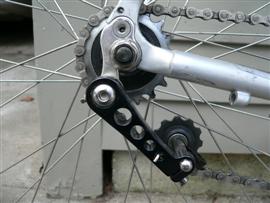 Why do all this in the first place? You can find many articles about the benefits of fixed-gear riding, so rather than re-hashing what's already been written, I thought I'd share my first riding experiences, initially posted on Grace Bicycles' forum.

First off, no coasting is correct, but not entirely accurate. It's probably better to say there is no way to stop pedaling; or, pedal at all times. It's a subtle difference, but for a newbie, it's a very important distinction.

It's scary. I took my first ride Sunday... I was planning to hit a flat loop near the schools where I live, but I was running late, so I left from my house. The first time I tried to clip in, I fell. When clipping in, one cannot stop pedaling to line up the second foot, or back pedal to line up the second foot. After I finally clipped in, I spent 10 minutes in the driveway, and then figured what the heck. I live between two hills, so not matter which way you go at the end of my driveway, it's up. The driveway is also very much down. So there was no coasting to the bottom of the hill, as is my usual process, and that almost led to my second crash. Luckily, I held on, saw there was no traffic, and was on my way.

I was more connected to the bike. I pedaled, the bike moved; the bike moved, and I pedaled. Still, never, ever, ever can one stop pedaling. Simple little things like looking over my shoulder to check the traffic, when I usually stop pedaling, can't be done. Unconsciously, riding gears gives a lot of chances to stop pedaling, and going fixie points out all those little instances. The bike tells you instantly with a little jolt when you try to stop pedaling. There is a certain amount of authority that the bike now commands, and understanding and accepting that will take some time.

On moderate hills I think I was faster. I worked harder, and my pedal stroke was stronger and more efficient. On steep hills, it was harder. I had to stand a lot. Again, I felt my spinning was more efficient even though it was more strenuous. The most interesting thing was that I never had to think about gears, so it was all mental and physical energy focused on the riding. I don't know the percentage, but I really do think that changing gears takes a lot of effort.

Bottom line is that it's harder on the legs, I was more connected to the bike, and the bike had a different personality. It is challenging and well worth the extra effort to learn how to ride fixed gear. It adds a whole new dimension to being on the road.

Last, I did fall off the bike a second time. About ¾ of the way through my ride, I stopped near the top of a particularly steep hill. Let me just say that clipping near the top of hill offers many challenges. Having enough forward speed and leg power to keep the bike moving is one of them. Let's just say that a fixed gear bike will just as easily go backward as forward.

An one hour ride at lunch. I won't say that anything was instinctive, but I will say that some things came a lot easier. Clipping in, for example, was 95% of the time easier than the first ride. I found that remembering that I had to keep my first clipped-in-foot pedaling made things go a lot smoother. Also, planning ahead for stops made things easier... I did not coast to a stop, but rather braked and kept pedaling until I could unclip both feet and then come to a final stop. I am not sure if this is the right technique, but it sure felt a lot more comfortable than what my brain was trying to tell me to do: stop pedaling, unclip one foot, and get ready to put it down on the ground.

I rode one very steep hill. It was an impulsive choice. At one fork in the road I could go right - relatively flat - or left, steep. I don't think the Raleigh talks, but I am fairly certain I heard a quiet, "C'mon. Give it a shot." Wow. Steep is a lot of work, but as it flattened out toward the top, I felt like I was going faster. My heart rate was going crazy. But by the time I was over the top, I was actually pedaling strong.

You can't coast and rest after a big climb, but you can let the bike just go, which forces your legs to keep moving. All in all, it's still resting, but with a lot of motion.

I took all computers off the bike. So I have no idea of cadence, time, speed or distance. It's kinda nice not to think about those things. I feel more like I am out for a ride. I still push myself, and I still do the fixed gear version of a coast, but I'd say that in general I am more focused on the feel of the road, my surroundings, and the general sense of being out and away from "it" all.

The most I have ridden on my fixie is 40 miles on a rather hilly route through Westborough, Grafton and Southborough. I have done this same route a lot on the IF. Overall I was about 15 minutes slower on the Raleigh, and I attribute that to the pace on the hills, both up hill and down hill. Remember, you have to pedal in relation to the speed of the bike, so going down hill may require more braking, otherwise you can spin out of control.

A bike's speed depends on how much power you can produce to overcome the forces of gravity, air resistance and friction. On a road bike, by using different gear combinations one can apply the same amount of power and overcome various forces in different ways such as a high gear on a steep hill. With my IF, there is a certain degree of patience, contemplation, submission, and unbounded energy that she emits. But on a fixie, it's one gear all the time, and overcoming riding resistance to generate speed is left up to your own changes in power, cadence, and mental outlook. Hence, one feels more connected to the changes in road conditions. The road is connected to the wheel, the wheel to the hub, the hub to the chain, the chain to the crank, the crank to the pedals, and the pedals to my feet. Everything moves together, and the connection between all the pieces is undeniable. There is no arguing with the Raleigh, no cajoling, no negotiation; we just go. I pedal, she moves. She moves, I better be pedaling. The Raleigh is raw and totally unforgiving. Pedal. Balance. Stop. 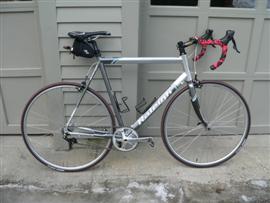 I love riding my Raleigh again. The IF, she's mad. But she understands. As long as I ride, she is remarkably tolerant of my other friend (for now). I don't know if Einstein had ever ridden a fixie, but I like to think he would have said, "Life is like riding a fixie. Everything is connected, and take the roads as they come."

Paul likes to keep balance in his life.